Somewhere along the way, a perception took hold in health care--that talking with patients about money was a direct path to dissatisfaction. In this blog, I’m going to turn this assumption on its head. Is it possible that hospitals are getting it backwards—that in fact, patients are dissatisfied because they want to talk about money and no one is having this conversation with them? If so, it certainly calls into question many of the processes we use in the revenue cycle today. But it might also offer hospitals a path to achieving earlier resolution of accounts--by tapping into what patients really want.

At first glance, it makes sense that patients don’t want to discuss the financial side of healthcare. After all, who really wants to discuss money they owe? But let’s take a moment to unpack this long-held perception that hospital patients don’t want to talk about money. Where does this belief come from? One reason is simply because historically, it hasn’t been done. For decades, nobody in the hospital ever talked about money with patients. Like politics at family get-togethers, it was viewed as a taboo topic and just wasn’t done. Many hospital employees still feel it’s wrong to do so. Some may even believe it’s contrary to the hospital’s mission. But there are a few problems with the assumption that hospital patients don’t want to talk about money.

The first is lack of evidence. The belief that patients don’t want to talk about money is just not supported by data. In fact, we’ve found the exact opposite to be true. It turns out that patients not only want to talk about their liabilities, they want far more information, much earlier in the process, than almost any hospital in the U.S. is able to give them currently. Adequate, accurate information, more often than not, is just not offered to the patient at the time when it’s most useful to them. And even pre-service estimates are not always enough.

According to our recent market study, a third of patients who got pre-service estimates were still dissatisfied—because they weren’t getting enough information. It’s one thing to hand someone a piece of paper with a number on it (and the paper always states, “This is only an estimate,” which by itself, is a confusing statement). It’s quite another to have a detailed discussion so at the end of it, the patient understands exactly what to expect with their coverage and charges.

Another problem with that assumption—one there is plenty of data to support—is that patients are highly dissatisfied with surprise medical bills. If patients don’t want a surprise bill—and we know they do not--isn’t talking in advance about what they’ll owe the only way to avoid it?

What do high-deductible plans, co-insurance, non-covered services, and narrow networks, all have in common? For one thing, these are all insurance terminology which patients probably don’t hear often and certainly don’t understand—until they go to use their health insurance. Secondly, each of these terms have the power to result in an unexpected bill for the patient. So many patients have made it through a challenging medical episode, but are then confronted with a different kind of problem: That “cheaper” insurance they purchased comes with a $6,000 deductible. The sinking feeling they experience soon turns to anger—at the hospital.

If no one talks to the patient about money at a point in time when the patient can still make choices and has options, is anyone really doing that patient a favor? Revenue cycle employees have the health care and insurance know-how to resolve patients’ financial situations that at first glance, seem unresolvable. Financial counselors can screen for Medicaid eligibility and charity care, obtain authorizations for services, offer payment plans or sometimes even obtain an exception from the payer if the hospital’s out-of-network so the patient can continue with services. Other times patients’ services need to be rescheduled or the patient learns they need to seek services at an in-network facility. None of this information is anything but helpful to the patient if it’s known early on. When presented with options in advance of care, the definition of affordable care changes. Patients can get timely, appropriate access to financial aid. When the bill doesn’t come for three months after the procedure, on the other hand, it leaves patients with few options. One of those options, of course, is to not pay that bill and allow it to go to collection.

Earlier in the process, patients have another option, of course. They can simply choose another hospital--wherever they believe they’ll get a better financial experience. Well, that’s about to get even easier for patients. Previously, patients probably worried about the hassle of obtaining their medical records. Some presumably stuck with a provider they weren’t too happy with, just to avoid that huge inconvenience—we’ve all had the experience of signing consents and paying fees just to get ahold of our own test results. That obstacle will soon be a thing of the past, however, driven in part by the Trump administration’s October 2017 executive order to promote healthcare choice and competition. [1] One way of doing this is to put patients in full control of their health records. The Center for Medicaid & Medicaid’s new initiative, MyHealthEData, will empower people to share their health records with whomever they choose. [2] Patients no longer have to worry about a new hospital getting access to their entire medical history—that won’t stop them any longer from seeking what they perceive as a better option. In reality, if a financial encounter goes poorly at any point, there will be very little holding patients back from simply choosing another hospital.

But let’s start with two premises: One, that patients don’t really want to go to another hospital—because they don’t. And secondly, that patients want to pay their bills. Sound surprising? Our market study found that the vast majority of patients pay the rest of their bills on time. Hospital bills are the one exception. Why do people put hospital bills in a separate category from all other bills? One big reason is information. Patients don’t need to know too much about their electric or credit card or mortgage bills. They just pay them. Hospital bills are complex and difficult to understand, even for those of us in the industry. Sometimes even the way they look is needlessly confusing. Again, we know that patients want to take care of their hospital bills. Lack of good information seems to be what’s stopping many of them from doing so. Isn’t this all the more reason to have early, educational conversations with patients as early as possible in the process? That said, these are complex conversations.   This brings up the issue of trust. It’s the reason why we simply cannot have poorly-trained, inexperienced people talking about money with patients. A highly-trained person can speak with confidence about not just the dollar amount and how it was derived but also the array of options available to the patient. In the end, if the patient trusts the financials, the patient is much more likely to pay upfront instead of delaying it as long as possible.

Considering all of these factors as a whole, it tells a story about why patients pay hospital bills late or not at all. Patients are surprised at the amount. They don’t understand the amount. And they don’t trust the amount. Lastly, the bill is coming at the wrong time. The proverbial bill in the mailbox shouldn’t really be mailed at all. With the right processes, the patient could have taken care of their liability weeks or months beforehand, either before services were provided or at the time of service. That alone would eliminate the dreaded surprise bill. It’s time to break the taboo of talking about money with patients. If we do it at the right time (early!) and invest in the right kind of training so the dollar amount can be trusted, many barriers to liability resolution no longer exist. In that world--one where it’s not only OK, but part of our revenue cycle processes to talk to patients about money--it’s highly possible that the hospital bill will stop being in a category all its own. It can become just like all the patient’s other bills--one that is paid on time. 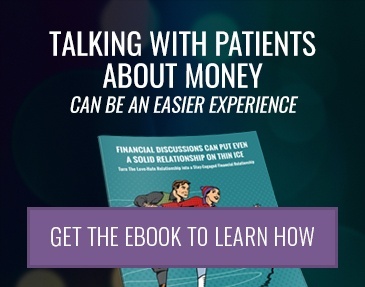